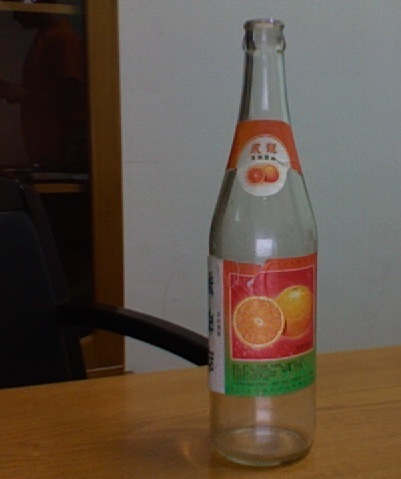 So this is a bottle I bought. It had orange pop in it. I bought it from a shop on the very edge of Changchun. It’s me.I found this bottle of pop after a particularly long walk with my boy Darren, another American teacher at my college. During camp, he asked if I’d be interested in accompanying him on a rather extensive walking tour of the city. The Yitong River slices Changchun longitudinally, and most of it has a nice brick walkway next to it. He was wanting to walk the river from the southernmost point in the city to the northernmost. My agreement sealed the preliminary deal.So last Thursday was the appointed day. We set out from the school in a taxi, accompanied by Dave, a last-minute acquisition. Unfortunately, I don’t have a picture of the look on the taxi driver’s face when we just stopped him on a bridge and walked away.A few hours later, we stopped for coffee and lunch. Dave hadn’t anticipated the scope of our trek and had other things to do, so we sent him on his way with a stomach full of California beef noodles and continued our journey. 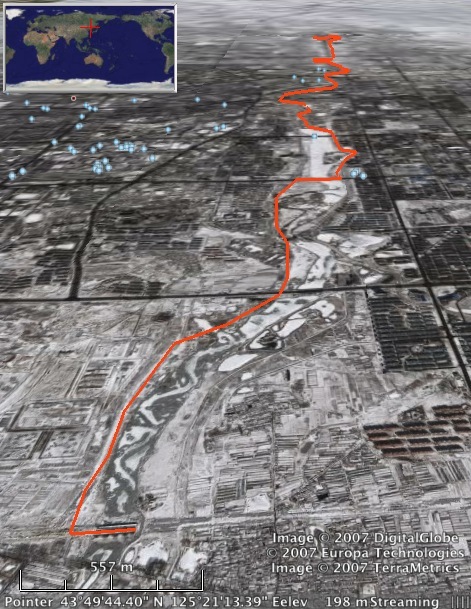 The river continued to guide us through the city, slowly pulling us away from the economic center of the city and toward the industrial sector, which doubles as the residential area for those less economically advantaged families. We finished our walk at the extreme north end of the city, caught a bus to the train station and took the light rail home.It was great to see the city from a different viewpoint. People going about their business, picnicking in parks, playing with their friends, working in temporary ponds and threatened fields. We walked from open fields to skyscrapers to open fields again. We hobnobbed with sustenance farmers, taxi drivers, students, businessmen, newlyweds, and the uniquely Chinese class of semi-retired workers. Changchun is a beautiful city. And it’s my home.I know those of you who have portaged over from the Blurb are expecting me at this point to explain how the bottle is me. I’m not going to. I don’t have to. It accomplished its purpose. You read this. Sorry, I’m lazy and uninspired at the moment. And loving it.