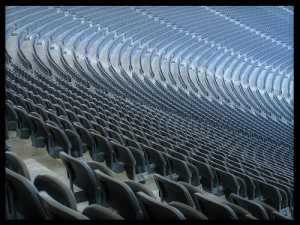 Here are some thoughts after watching far too much Olympics.

Near the beginning of the current Olympiad, I heard a quote about why we love the Olympics. The quote said watching the games makes us proud to be human. It went something like this: As we watch people do things that amaze us, it makes us feel a sense of pride that we, as humans, are somehow connected to such greatness. It makes us aware of our potential. Like, if we had given our lives to learn how to twist and spin into water, we could be just like the chinese girl that won the gold medal in diving (中国加油!). Or even if we couldn’t do it, we are still connected. We are all members of that amazing human race.

[Try not to read too much sarcasm in the preceding paragraph, please. That discussion will come later. I really tried to legitimately explain the idea. I did my best to hold any sarcasm in, but I’m afraid a little may have squeezed out.]

Here’s why I love the Olympics: It celebrates losers.

I know, I know, the best people get medals. But think about it. What we’re really saying is that everyone else lost.

Let’s take men’s basketball (since that is what is on at the moment). Twelve teams entered the tournament, each allowed 12 players. So before the Olympics even started, the field was narrowed to just 12 countries. Those 12 countries chose just 12 people. The rest weren’t good enough. I wasn’t good enough. Neither were you (unless Lebron happens to be reading this. You, sir, were good enough). So we’ve already selected the 144 best basketball players in the world, and we’re in the process of weeding those out to pick just 12 to call the best basketball team in the world. Everyone else in the world is a loser. Now we know for sure.

What other event could make it so clear?

The sad part, really, is that I fear the above quote may be the truth. The Olympics may be popular as a way for us to explore human potential. To inspire dreams. And that does, indeed, bind us together. All humanity has the irrational need to imagine themselves as something greater. It’s the human distinctive.

Seriously, can you imagine this in any other sphere? Some rabbit proving he’s practically a kangaroo because his jumps are longer than every other rabbit’s? An earthworm basking in the approving glow of all the other earthworms who can’t wrap themselves around a stick as many times as she can. I honestly can’t bring myself to believe the fastest dolphin in the pod has others comparing him to a shark.

No, I’m pretty sure just people are so sad.