After seven hours of downloading, I finally got to watch the State of the Union Address. After that much effort, I felt obliged to record my comments as they happened, thinking I might live-blog it three days late. Considering that a chronology would require you to either re-watch the speech or vaguely surmise context, though, I decided instead to present them topically and add a few notes.

Until last weeks ago, I assumed I was about the only American who found Barack Obama’s speaking style simply annoying. Then I had a chat about him with a Chinese student. It turns out I’m the only person in the world who finds Barack Obama’s speaking style annoying.Watching this speech reminded me why. Each phrase—of his speeches—is spoken—as if it is—it’s—own—sentence—worthy of—Bartlett’s. Each phrase also gets a falling tone, a vapid gesture (most often the left-handed pinch-point) reverting to folded hands, and a smug nod. Clunky. Pretentious. Annoying.

But something miraculous happened during this speech. Occasionally, he started talking in full sentences and with standard tones and rhythms. It turns out he’s conversant in normal English. I actually liked his style in parts.

Distractions other than the President

I’ve had my share of time onstage behind a speaker, so I know it’s hard. Pelosi did too. She was so self-concious that people were going to see her at the beginning she went out of her way to look engaged and engaging. She actually looked friendly—almost human. But that gradually gave way to making faces at the audience and then a glazed stare. Biden was tall enough to keep his face out of the picture most of the time, but he did randomly rub his chest for a few minutes.

I know audience response is the only way to express feelings, so I don’t blame Boehner for raising his hand or Alito for mouthing words any more than everyone else for obviously talking and making faces to could get camera time and making a point.

That said, where did the cheering come from? I thought I was watching a Presidential address, but at times it sounded more like a high school football game. I even got a distinct “U-S-A, U-S-A”.

I wonder if the recorder was trying to record the cheers, because he was definitely punching keys during an extended ovation. 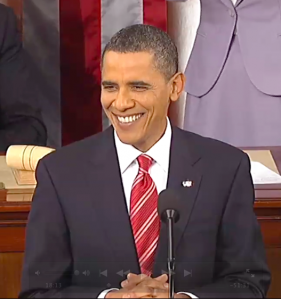 “The true engine of job creation in this country will always be America’s businesses.” Standing O. Seriously? That’s what we call a truism, people. It doesn’t really deserve an ovation.

“All this [activity that caused the economic collapse and subsequent deficit] was before I walked in the door.” Applause. They seriously applauded the budget deficit, since Barack said it wasn’t his fault. And just to make sure, the President paused and made faces until he got sufficient response. That, my friends, was disgraceful all the way around.

Things he said that I liked:

He broached the bailout early and effectively in argument, rhetoric, and demeanor.

A focus on jobs is a good call. A really good call. I especially like one that pays attention to infrastructure needs. Sounds a little Rooseveltian, but it’s worthy.

“I know the Senate will [pass a jobs bill]. They will. They will.” I found this particularly effective. He was applying some pressure, while displaying support for the Senate he had already referred to as “gridlocked”. (Sadly, it was the last positive gesture toward political opponents.)

He was pretty heavy-handed with the lobbyists. While they are Washington’s most bipartisan whipping boys, I hope he actually does something about them.

About those letter-writing children. Do kids really write letters asking the President why they have to move and how to afford homes and education and health care (and if they do, does he really read them every night)? ‘Cause those were either fabricated Obama talking points or some freakishly informed kids.

Anyone else pick up on the countless distinctions between himself and the American people? It started early as he told about how Americans faced a tough year, but “they” were resilient and “they” were staying busy and “they” were working hard.

“We won’t quit. I won’t quit.” Quite a way to finish a speech when you’re a President who already feels the need to deny a Messiah complex.

Things he didn’t say, but said:

If you really want to play a dominant part in the world, China, you have to join it. (Future trading partners have to “play by the rules”.)

Republican Senators, you’re the minority. Go away. (“If the Republican leadership is going to insist that sixty votes in the Senate are required to do any business at all in this town—a supermajority [thanks, Mr. Webster]—then the responsibility to govern is now yours as well.”)

Democratic Senators, let’s ignore everyone else and do whatever we want. (“Democrats, I would remind you that we still have the largest majority in decades[.]”)

Things he said, but didn’t say:

America will double its exports over the next five years. (How, you ask? By finding new, developing markets.)

My exports plan will create two million jobs. (That exports plan he doesn’t really have. Ironically, that’s the same wildly unreliable number of jobs he claims to have created with his stimulus package.)

I’m not sure, but it certainly sounded as if he repeated the numbers from his famously inaccurate website to track job creation. I’d call that both deceitful and stupid. But that’s just me.

“We can’t afford another so-called economic expansion like the one from the last decade—what some call ‘the lost decade’.” Who, exactly? I’ve read a lot about the economy lately, and I’ve never heard that. Even from the most depressing pundits.

The CBO says the health [insurance] reform bill will reduce the deficit by one trillion dollars in two decades? Say it with me, Joe: “You lie!”

The Republicans’ response to deficits would be to make “fewer investments in people”—by giving tax cuts. To people.

Health care reform has been in progress for the last “century”?

Ways he contradicted himself:

He’s all about transparency. But the Supreme Court ruling that lets corporations make political advertisements with their names on them instead of doing it through a PAC is a problem.

“We could argue about who’s to blame for [lack of unity], but I’m not interested in re-litigating the past.” Other than when he just spent the last half hour blaming Republicans and Bush for all our problems.

“I will not give up on trying to change the tone of our politics.” “Democrats, let’s rock. Republicans, go home and die. [paraphrase—see ‘Things He Didn’t Say, But Said’ for the direct quotes])”

His agenda is worthwhile. His speaking style was lighter—almost relaxed and engaging at times. His rhetorical vision was grand, generous and participatory. His message was spiteful, dismissive and partisan. Despite my personal distaste for his delivery, I recognize that he has inspired millions to act in a way that might realize his vision. We’d be a lot better off if he could inspire himself to act in a way that might accomplish his vision.