As I wrap up my first year in China and lube the skis to glide blithely into the second, I’ve given some thought to what I’ll do a year from now. I’ve realized that overseas journalism might just be my ticket.

I’ve been thinking about it and have realized that there are a few prerequisites to a career in overseas journalism.

There might be other stuff, too, but I think those are the basics. I thought I was in pretty good shape for this career, when my ponderings were confirmed.

I’m not announcing any plans, hopes or even desires, but I thought I’d share the joy of my first big break.

I was published in by an international media giant.

Knowing you would be skeptical, I secured proof (or you could go see it for yourself): 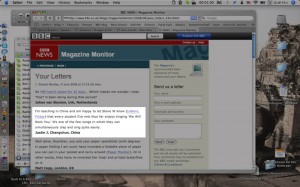 Yes, indeed, ladies and gentlemen, that “Justin J” in Changchun, China, is the rising star you discovered early. And before you go and pass it off as my commenting on an article online, allow me to direct your attention to the post heading: “Your letters.” It clearly indicates my piece of writing was subjected to scrutiny and selected for mass reproduction. It is not obstructed by a screen name or subjugated to the possibility of a user’s complaining about it.

I made it to the big time.

Actually, if you want to know the truth, they’re only returning the favor. Do you think it’s a coincidence that my feature in BBC’s Magazine Monitor came within a week of my plugging it? I don’t think so either. So, I know you’re reading this NY Times, but I’ve not heard from you yet. You could still beat Reuters, Slate and even the Onion. But you’ll have to work fast—the BBC and I are getting pretty cozy.