I’ve had a mantra over the last couple of months: It’s fun to be a foreigner in China. I decided to test that claim last week with a trip to a different part of China.

Last week was a break from the routine of classes because of the National Day holiday, which, after making up a couple of days of school on Saturday and Sunday, turned into a week-long holiday. I’d been wanting to see more of China for some time now, so I grabbed Andrew (another teacher in town), and we headed off to Shenyang. Now, Andrew has studied some Chinese, but he’s not a native speaker yet. I can order food. It was going to be a challenge. 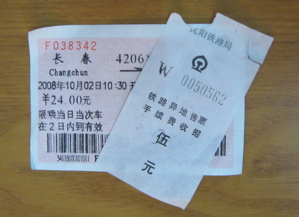 The first challenge up for grabs? Tickets. Some other friends were leaving for a trip of their own earlier in the week, so I got help from a native speaker to secure a ticket to Shenyang, but it was too early to get one back, so our initial test was a rather important one. It was easy. Wave a little money, flash the ticket beginning the process we hoped to conclude, and we had two train tickets and two little pieces of paper that cost 5元 each but no one could tell us what they were for.

We hadn’t even gotten on the train yet when the communication game started. When you’re as conspicuous as an American in the Changchun train station, you begin to interpret stares fairly accurately, so I wasn’t surprised when the young man that had been watching us in the waiting room was waiting for us just after the gate. I was surprised when it turned out he could barely speak any English. He apparently was just interested in foreigners and willing to decelerate, standardize and simplify his Mandarin enough for us to understand him. His standing ticket didn’t restrict him to any particular location on the train, so he followed us to our seats and even managed to secure an open seat for most of his short ride. And the party started.

We spent the next four hours engaging, more or less, in Chinese conversation. First with our new friend, then the woman next to me, and finally a businessman who decided he liked us. Each had their own conversation style. The young guy was careful with his Chinese and willing to work through our limited understanding. After hearing us talk for a while, the woman decided she had a few questions, so she chimed in. The unfortunate part was that her Chinese was more like the average person’s Chinese, meaning it sounded to me more or less as if she were talking through a vacuum hose—with the vacuum turned on. She seemed a little disappointed with our blank stares, but our friend came to the rescue and translated her questions from real Chinese to foreigner Chinese. This led to a happy conversation about our home and family and love life. At this point, our young friend had reached his destination, and a businessman who had been enjoying the show decided to get in on the action. He had realized that we understood better when things were slow, so he dropped the speed down to about six words per minute and cranked the volume up to just below vocal chord shredding. The rest of the car had pretty much gotten over the foreigners at this point, but all the commotion reinvigorated them to stare some more. He eventually settled into a more naturally communicative speech pattern and we discussed our lives. We even learned we had our Christian faith in common, and he promised to call and invite us to visit his church some weekend.

As for the Chinese factor, I was able to follow some of what was being said, but Andrew’s comprehension was better. I, however, seemed to generate more interest (I assume because I was closer to them), so I generally understood and answered as well as I could, got some help from Andrew when possible, checked my mini-dictionary a few times, and played a rather hearty game of charades. It was not the most effective communication, but it was interesting and enjoyable, and fueled my desire to learn the language.

So far, I hadn’t done anything new, but that was about to change. I arrived in a new city armed only with a phrasebook and a hotel reservation. We stopped in for a little bit of home at Yoshinoya (I meant Andrew’s home) to prepare ourselves physically, mentally, and emotionally to get to the hotel. The first taxi driver we spotted knew the hotel, took us there, and had nice standard Chinese so we could chat about his family back in Heilongjiang.

I was feeling pretty good as I popped out of the taxi and pulled my reservation voucher from my bag. It could have been hard to get a good hotel on our own, so I was glad to have done my research online. The place looked nice and was pretty well located. The receptionist stepped on my toes pretty hard during the happy dance, though, by informing me they had no reservation for me and no available rooms. I kindly informed her they did have a reservation for me—I had the confirmation number on the form for her to check out. She still denied it. So Andrew politely informed her of our reservation, as indicated by the reservation voucher we had given her. Yet another rejection. And our Chinese was better than her English, so communication was not exactly profuse.

At this point, she started making phone calls and clicking buttons on the computer while her associate went back to browsing her magazine. Less than encouraging. Our requests for information or someone with more information yielded an exhortation to wait. Fifteen minutes later, she called me over and, without a word, handed me the phone. Through the phone, an English-speaking Chinese man apologized for the problem, told me he would sort it out, and asked to speak to the receptionist again. She took the phone, said goodbye and hung up. More waiting.

Andrew and I were starting to worry a little. A brief mental review of my conversation enlightened me to the fact that the man I had spoken to had called me by name, so he must have been with the agency I used to make the reservation. Another round of charades, and we had the number our receptionist had used to reach him. Conveniently, the number is busy. After a few tries, I managed to get through to a lady who used her minimal English to tell me she was working on the problem, and that she would call me back with a solution in a few minutes.

Another half-hour, and we decided to solve the problem ourselves.

Andrew got a hotel recommendation from the receptionist and wisely asked her to call and check for vacancies before we went. She found they did, indeed, have a room they could reserve for us. It would only cost 580元 (my ‘reserved’ room was 177元). We then explained that we would like a room more in the price range of the one we had selected, and she pointed out a hotel a few blocks away that could accommodate us.

We made it to the hotel and found they had available rooms. But we couldn’t have one. When asked why, the receptionist told us foreigners didn’t stay there. We smiled and said we understood, but we would be happy with their rooms. She responded by shaking her head and refusing to communicate further. Fortunately a maintenance woman standing by happened to have great English and explained everything the girl had said in English. We asked why we couldn’t stay there, and the maintenance woman looked confused. After several minutes of conversation, she explained the hotel was only a three-star hotel. We assured her that we were fine with that as she ushered us out the front door and told us where we could find another affordable hotel. I have been in hotels that implied I wasn’t good enough to stay there. I have been in hotels that I didn’t feel good enough to stay there. It was the first time I’d been in a hotel that told me it wasn’t good enough for me to stay there.

We wandered in the direction our rubber gloved guide had pointed, but couldn’t find the hotel. It was a nice walk, though. We had made our way onto one of Shenyang’s walking streets, with plenty of activity, overpriced shopping and Western food. Finally, we spotted some hotels. I recognized the first one from my online hotel research as the Shenyang branch of the Shangri La. We knew prices were rising, but we were about fed up enough to pay them anyway. Bracing ourselves against the potential wallet weight-loss, we headed into the Golden Triangle hotel and priced a room. They had one available for 300元. I don’t know about you, but I have moments when I know I’ve made a decision even though I’m going to go through the motions of considering it. I was staying in that hotel.

Fortunately, Andrew had the insight to ask if they had something cheaper. They offered us a room for 280元. Looking back, I realized it was the same room and they were beginning to bargain. Unfortunately, our Americanism had kicked in and we didn’t realize that then. So, for 100元, we had upgraded the hotel and location.

I realized, though, that we still had not resolved our reservation issue. I tried the number a few more times before getting through to the woman who told me she was working on it before we got cut off. My phone rang seconds later, and it was the gentleman I could talk to. I almost would rather not have understood him. It would have been easier to maintain a good attitude. He informed me that they had not bothered to actually make the reservation they had charged me for, but that they had worked hard to ‘solve the problem’. If we would go back to the original hotel, he would make arrangements for us at another hotel and get a taxi to take us there. Informing him that we had already found another hotel, I asked if he could make arrangements where we were (with our paying the 100元 difference). He sputtered that he couldn’t. His staff had spent time making a reservation for us elsewhere and as we had a reservation with him from the beginning he had the right to make other arrangements for us. I reminded him he’d had the right to make the reservation I had requested in the first place and that by waiving that right, he had cost me precious time and money.

I really wasn’t interested in trekking back to the original hotel to wait and see if they could start getting things right. I canceled my reservation, signed on the dotted line and went up to enjoy our couch, soft beds, plush carpet, clean bathroom and complimentary bath robes.

Ripoff: 177元 (They had managed to charge my credit card despite the inability to reserve a room. No refund. Yet.)
Lesson learned: Never use Agoda Travel.
Experience points: 1

We were finally ready to see the place we were visiting, but the hotel fiasco had eaten too much time to make it to any of the sights. Similarly, it has blocked off enough space on the blog to earn it its own post.

The rest of the story will follow soon.
Pictures of the trip are ready for viewing.

5 Replies to “Excursion: Shenyang (Part One)”